In case you were wondering, Ionic is powerful!

We recently put the final touches on the latest version of a mobile app for famous Fortnite streamer, Squatingdog. His companion app for Battle Royale players everywhere has been a lot of fun to work on! For this app, as with many of the mobile apps we work on, we …

We recently put the final touches on the latest version of a mobile app for famous Fortnite streamer, Squatingdog. His companion app for Battle Royale players everywhere has been a lot of fun to work on! For this app, as with many of the mobile apps we work on, we built it on Ionic. Where appropriate, we advocate using Ionic because it  allows you to use a single codebase for both iOS and Android apps. For some apps, the level of complexity makes Ionic a non-starter. However this app is a great example of how robust Ionic can be. 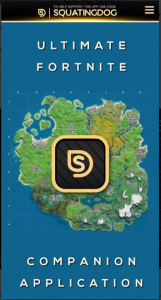 Instead of our typical backend package of Python/Django we used GoLang because we needed more speed. GoLang is fast, especially as a webservice. In this app, we rendered our interactive maps with a library called Mapbox GL, which uses WebGL to render interactive tiles, basically square subdivisions of the map. We convert a single image of a map into a tileset, composed of increasingly smaller tiles called raster tiles. The tileset file of the map is then read and rendered by Mapbox.

Our app handles not only the fictional landscape of the Fortnite map, but also all the pin drops for the challenges, the user history as they complete challenges, and efficient management of zooming in and out on this dynamic map without overloading the server or slowing down the the user’s experience. Perhaps one of the coolest pieces of technology we leveraged was an open source software called GDAL which converts the standard image into the raster geospatial data we need for WebGL.

Now from the outset, this level of complexity might appear outside of what Ionic can handle, but by integrating the proper pieces of technology — opensource, GoLang libraries, and even leveraging the speed of GoLang itself — we were able to build a beautiful app with a streamlined and consistent user experience. The maps render beautifully and quickly as the user zooms in and out… on both your iPhone and Android device using a single codebase!

If you have a mobile app idea that you want to take to market quickly and on a lean budget, don’t hesitate to reach out to us! We are Ionic experts and we deliver on time and on budget!

What You Need to Know When Building Kiosk Software

Cody and Andrew discuss the unique considerations you should keep in mind as you work on kiosk projects. While a lot of the software technology can...

Kiosk or Mobile App: Which is Right For You?

When you’re thinking about your custom software solution, sometimes it’s not clear whether a kiosk solution or a mobile app would be better. Since...

How and Why to Make Your Own Wireframes

A process that we’ve referenced obliquely as part of our project road mapping process and in our blog about planning your kiosk software is creating...

Get notified about the latest in Tech

Be the first to know about new tech from the experts at Bixly!